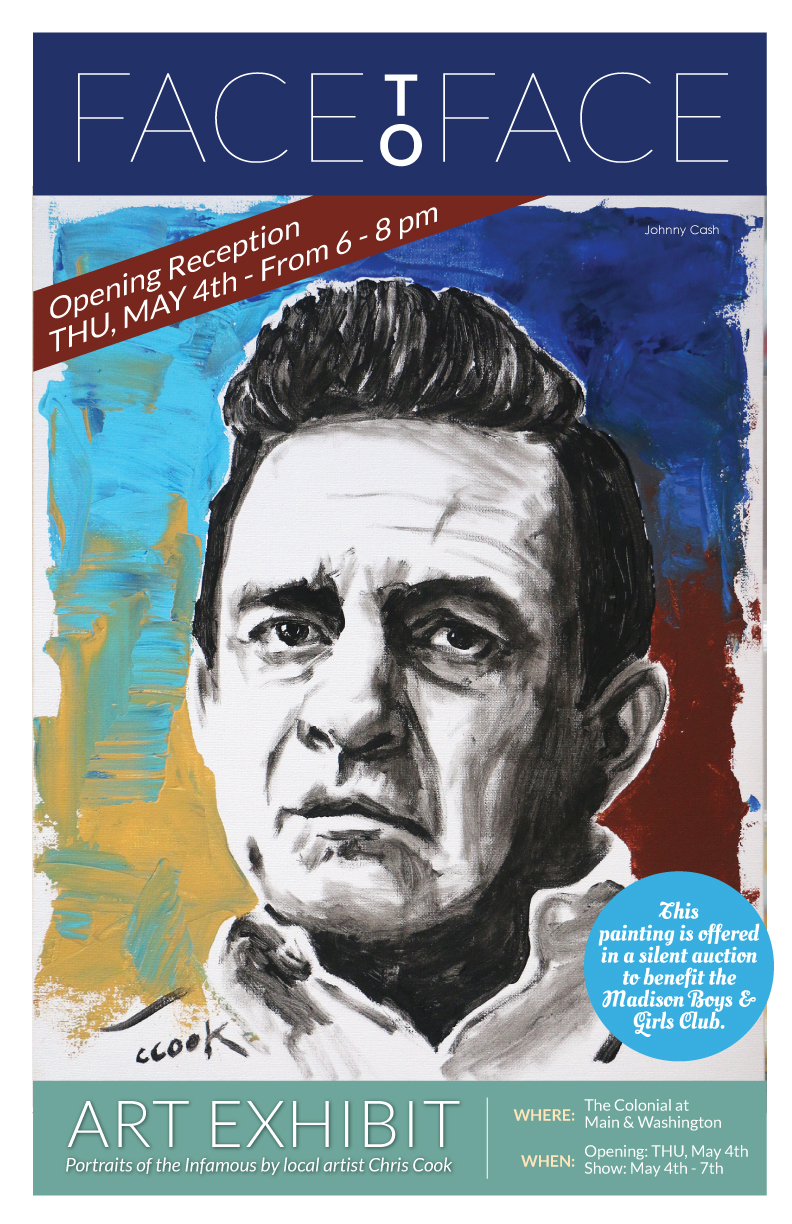 When Chris asked me to begin writing blog posts again, I was excited and thrilled. I love his artwork and really enjoy stretching my creative writing muscles as I compose these pieces about his paintings. This particular upcoming show is one that I think will feature Chris’ ability to tell stories through images in a very dynamic and thrilling way.

The exhibit, “Face to Face – Portraits of the Infamous” will be shown at the Colonial at Main & Washington from Thursday, May 4 through Sunday, May 7. When I asked Chris about his inspiration for the subject matter, he told me he painted one just because, and that quickly turned into many, which seemed a natural fit for an exhibit.

As I began to ponder the idea of infamy and look at this portrait of Johnny Cash, It started to click with me just what Chris was up to. Chris told me that this exhibit is much less about the individuals that he paints themselves, as it was the “face” of that person. Johnny Cash was a man with a tremendous gift to tell stories through song. His strong voice is definitely unmatched and completely unique. His hit “I Walk The Line” sat on Billboard’s record charts for 43 weeks and sold over 2 million copies. In 1980, he became the youngest living inductee into the Country Music Hall of Fame. After being inducted into the Rock and Roll Hall of Fame, he joined an elite club of performers that are in both organizations.

Cash’s infamy came in part from his “bad boy” appearance and the addiction to narcotics that he developed to keep up with his hectic, 300 shows a year schedule that he had in the 1960s. The “Man in Black” kept up his no-nonsense persona even after recovering from addiction. Despite his storied past and outwardly defiant appearance, Cash had a gift that could not go unnoticed. He was the man that, regardless of how you felt about his character, one could not deny the passion and talent that he showcased.

This piece will be sold in a silent auction in conjunction with the art exhibit as a fundraiser to benefit the Boys & Girls Club of Madison, Georgia.