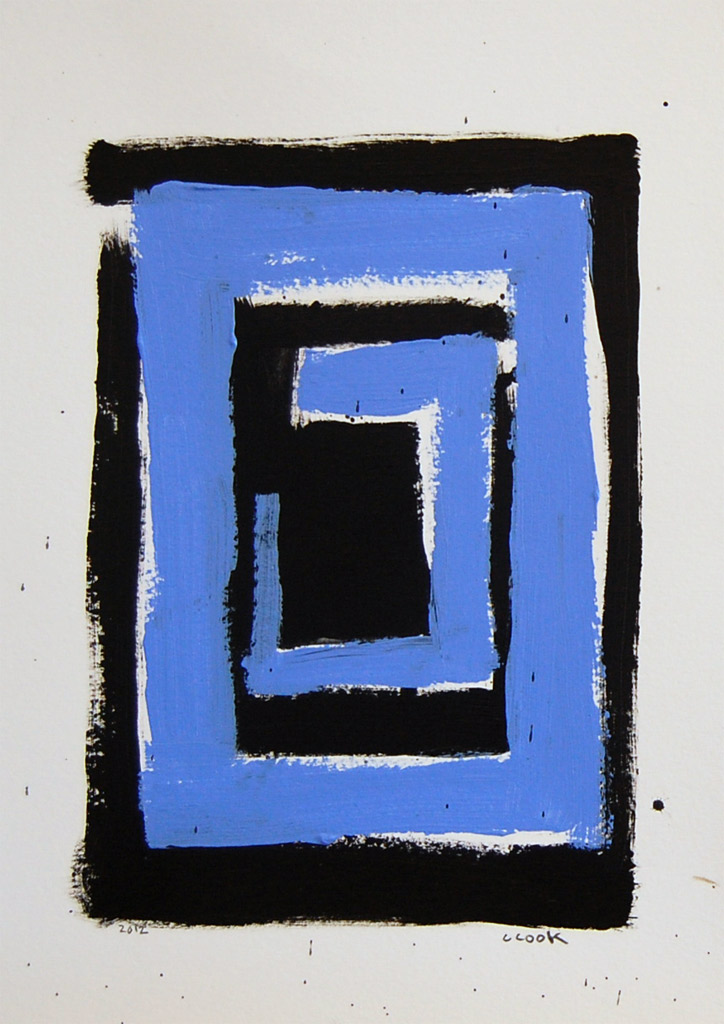 As I write this post, a recent memory springs up in my mind. Earlier this year, my dad had an art show at the Steffen Thomas Museum focused on Christian Art. One afternoon, Chris and I decided to go over there so I could look at his show. I am always amazed at my dad’s art and this was no exception. As we went from painting to painting, I could not imagine the countless hours he spent on each one of these paintings.

However, our trip did not last countless hours as I looked over  30 paintings in about twenty five minutes. This was not due to my lack of interest, but more to my novice mindset towards art. Art is similar to most skill activities in that people that are active in said activity can better understand and articulate the small actions that lead to a great piece of art, a great football play, or a great movie. I am embarrassed to say that I did not pay close enough attention to the intricacies of my dad’s art, but I accepted to write these articles in hopes I could learn more about my dad’s favorite past time.

Is painting two pieces that are strikingly similar, a lack of creativity or a different expression of the same idea? When I first saw these two paintings side by side on Chris’s website, I could not distinguish if one was just the finished product of the other. The first painting seems to have larger and thicker brush strokes than the second, which has more white spaces separating the strokes. Both paintings are surrounded by a black box that has an opening on the northwest corner. The opening could be an escape from whatever the black box contains. But I do not believe that the box holds evil or Chris would have used a different color than a calming light blue. Imagine the light blue being replaced by a dark red, the paintings would have a menacing feel to it. The shapes inside the black box make the painting continue on and on like a hole going to nowhere.

One aspect that I love about both of these paintings, Chris lets the art happen instead of “correcting” the mistakes. In the second painting, there are black dots right above the black box looking as if they it was an accidental drop of paint. If this was my painting, I would most definitely try to cover up “this mistake” and enlarge the top black line. But this would make the painting lose its integrity as thin strokes. The black dots are my favorite part of this painting, they immediately draw my eyes and show a contrast from the first painting.  Painting two paintings that are similar may be to some a lack of creativity, but I believe that Chris was not finished expressing his idea and needed two paintings to show that idea. Or, he just likes painting black and blue squares which is still pretty cool if he paints like this. 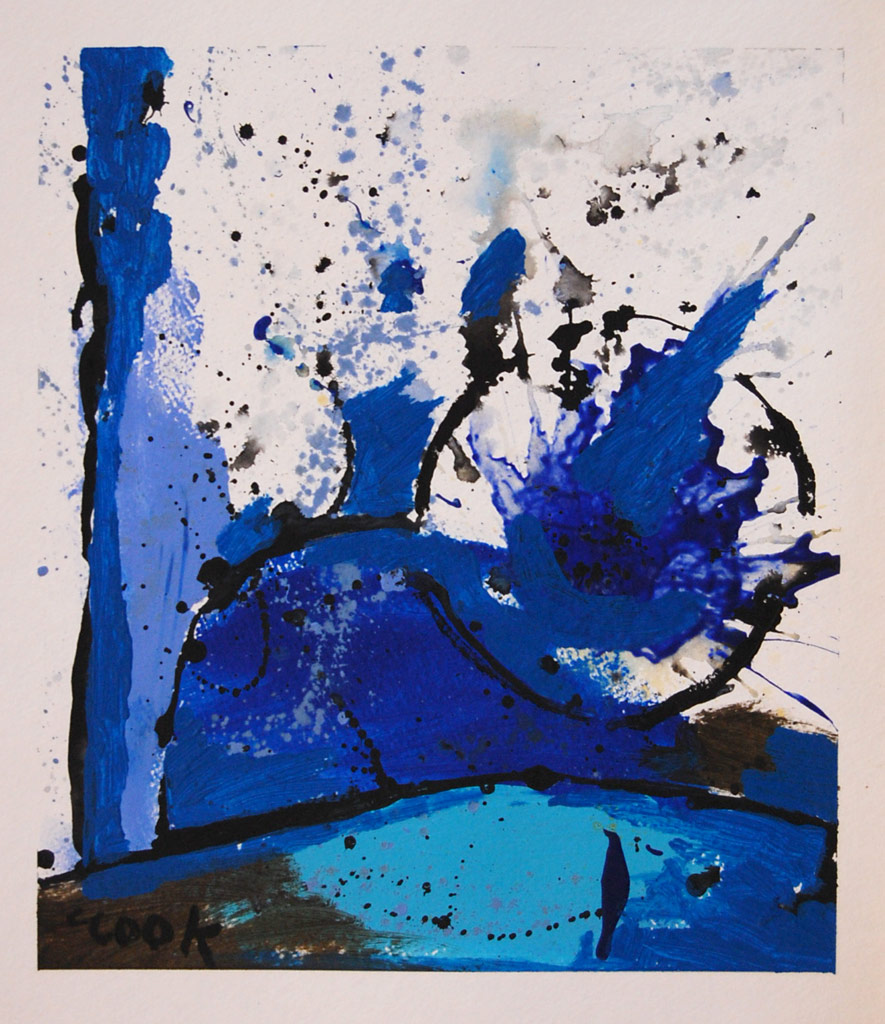 Before writing this post, I read an article about abstract art discussing Piet Mondrian views on art. Mondrian was involved in the De Stijl art movement, an art style focused on isolating a single visual style that would appropriate for all aspects of modern life. The style resulted in implementing geometric blocks of primary colors and vertical and horizontal lines. Mondrian’s art theories greatly affected his abstract art style & his quote about abstract art stuck out to me when looking at this painting, Mondrian said

“The emotion of beauty is always obscured by the appearance of the object. Therefore the object must be eliminated from the picture.”

When I first look at this painting, I see splatters of ink. There seems to be an incident where ink has spilled all over the canvas. Reminiscent of the incident of an ink pen breaking in my pocket and ruining a pair of jeans I had when I was a kid. As I try to make sense of this painting, I run into problems. My eyes scan the painting, and the big splatter of blue paint could be a break of ocean water from the wave, ( the other expanse of blue). Then I run into the problem of what the black circle is surrounding the blue splatter. While the other colors seem random & in no particular order, the black lines seem to be purposeful.

I was drawn to this painting because Blue is my favorite color. Blue is associated with calmness, but I think this painting shows a different side of the color blue. This painting shows the strength of blue, like an ocean, calm but has the possibility to be destructive & explode. Chris could have planted the brown to show that the water had taken over all of the land except for two small parts. Reflecting back on the Mondrian quote earlier mentioned, by Chris not becoming fully immersing in painting the object “perfectly” he is able to express the real message. 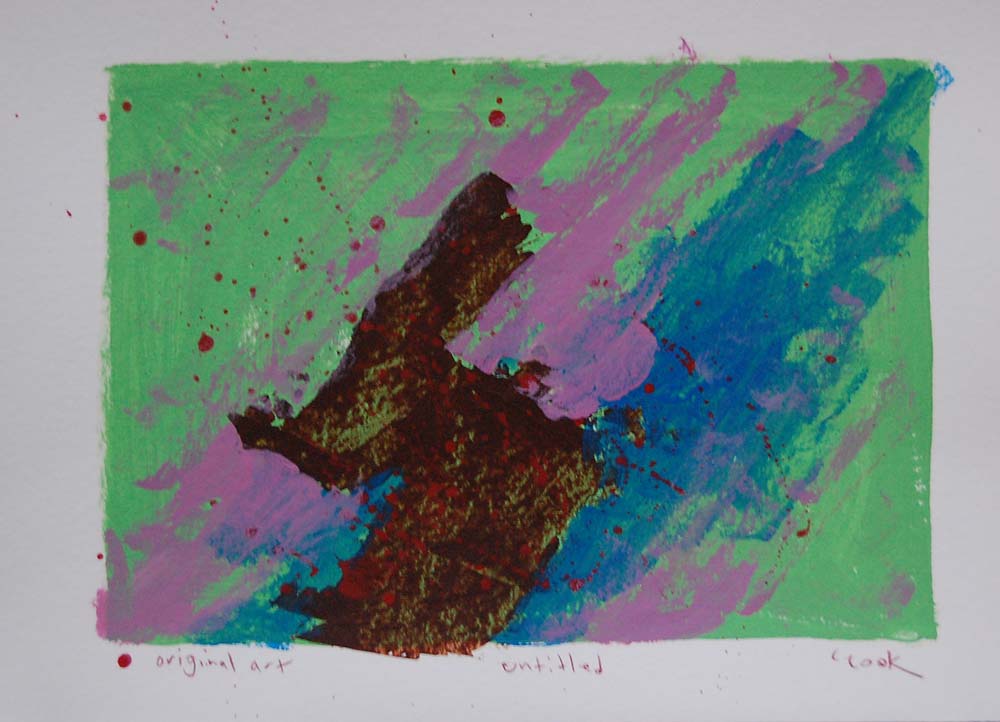 As a kid, the few times painting with my dad in his art studio is one of my fondest memories. My art career was relatively short, but my art style was eerily “similar” to his, or at least that was my goal (This was never accomplished). Our childhoods greatly affect how we experience the world and how we express our creativity. Chris’s father painted houses as a career and Chris would come paint the houses. I am not well versed in the art of painting houses, but I can confidently say that abstraction & creativity are not norms for painting houses in the South. A homeowner  would be furious if their house ever looked like this painting with splotches & random colors on it. The homeowner would probably hear complaints from his neighbors, Southern hospitality. I am always curious on how my grandfather’s occupation with purposeful & little abstract painting affected how Chris looks at painting.

At first glance, I swore that the brown in this painting was an abstract dog playing in a puddle surrounded by a green landscape. After a little reflection though, I take back that assumption for two reasons. First, I believe that as humans when we see anything, we try to make sense of it. Whenever anyone sees abstract art, they try to put it in a category, try to understand it, instead of just experiencing it. My second reason for taking back the dog assumption is because, quite simply, my dad does not like pets enough to do an abstract painting of one.

Similar to the last painting, there are a mixture of colors clashing together. But even more than that, there are “random” red splotches everywhere on the painting. What convinced Chris to put red splotches on a painting that most would assume does not need any red? Why put more or less red splotches on an abstract painting? Its amazing to see all the creative art expression of Chris, because has hundreds of these small paintings on paper.