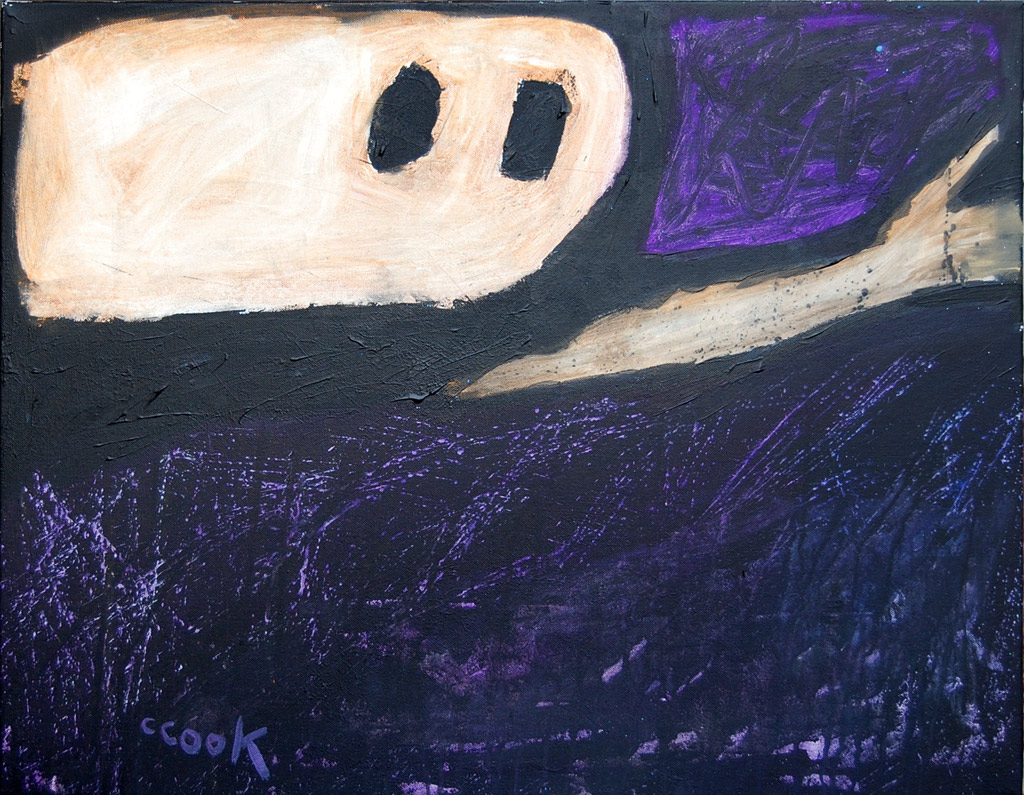 “Now the earth was formless and empty, darkness was over the surface of the deep, and the Spirit of God was hovering over the waters.”

The image of God here is conveyed as simplistic, and almost childlike. It is intended to express our childish and simplistic understanding of the creation story. It is difficult for us to fathom God’s presence existing before matter, space and time were ever constructed. Through the hand of God, beauty and life were able to spring forth from the watery chaos. May it be so in our lives that, through a childlike faith and understanding, we are able to let His presence pass over us and bring forth new life, and a new spirit within each of us.

More information on the artist can be found at www.chriscookartist.com/bio.html 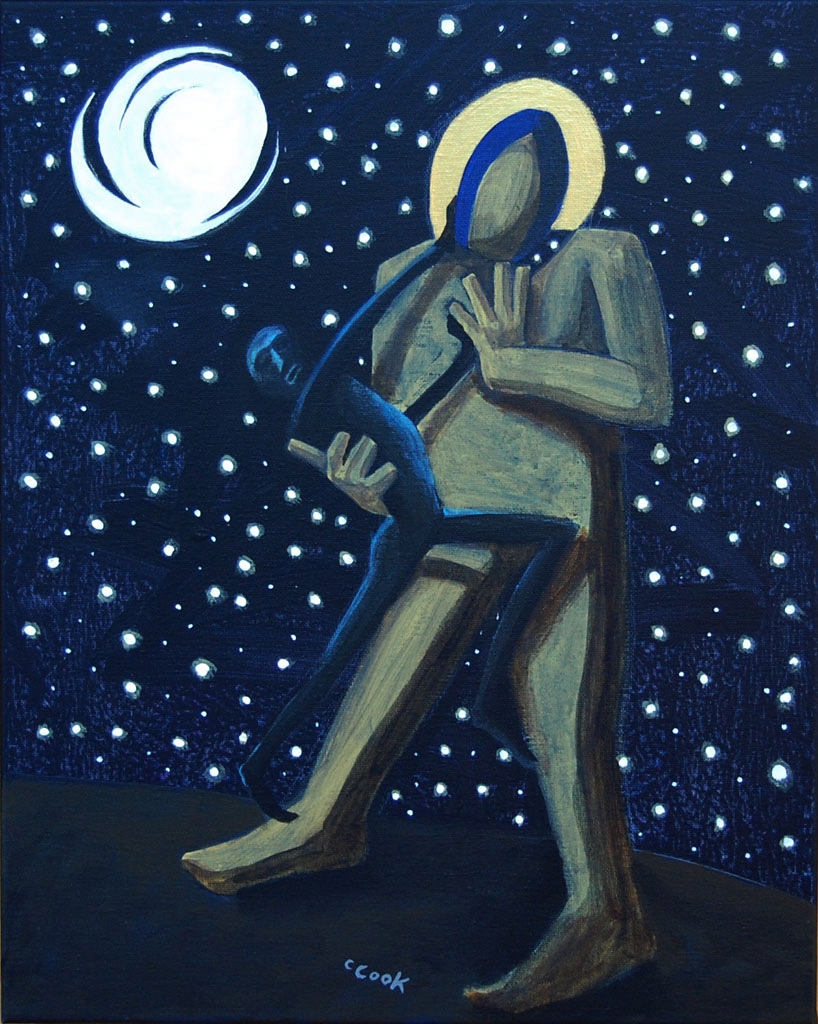 24 So Jacob was left alone,and a man wrestled with him till daybreak. 25 When the man saw that he could not overpower him, he touched the socket of Jacob’s hip so that his hip was wrenched as he wrestled with the man. 26 Then the man said, “Let me go, for it is daybreak.” But Jacob replied, “I will not let you go unless you bless me.”

28 Then the man said, “Your name will no longer be Jacob, but Israel, because you have struggled with God and with humans and have overcome.” 29 Jacob said, “Please tell me your name.” But he replied, “Why do you ask my name?” Then he blessed him there.

30 So Jacob called the place Peniel saying, “It is because I saw God face to face, and yet my life was spared.”

Jacob was a man who searched and struggled his whole life. Born the second son, he had to manipulate his father Isaac into giving him the blessing that should have gone to his Older Brother, who was quick to give it up for a bowl of stew. From then on, his brother pursued him out of anger and frustration; Jacob never really found rest. Life was a struggle, even for Abraham’s grandson…

The match starts as we find Jacob alone, having sent his possessions and family on ahead of him to meet his brother, hoping to pacify his brother’s wrath against him. Jacob is alone, waiting to see what lied ahead. He finds himself face to face with God, and what does he do? He jumps right into a wrestling match that lasts through the night and on into daybreak the next day. He only lets the man go after receiving a blessing, but is left with a permanent limp as a reminder of his struggle.

Wrestling with God… One might ask who could be so arrogant as to jump into a fight with the almighty, the one who spoke the earth and everything in it into being. Growing up, I often asked myself, “why on earth would anyone pick a fight with God?” And then, life hit me….

I began to realize that a life of faith is not always sunshine, rainbows, and lollipops. A Christian’s walk is sure to be one full of trials, tribulations, and struggles; with the difference maker being knowing who is right alongside us the entire way.

I wrestled in high school, so I have an understanding for what it takes to try and stand toe-to-toe with an opponent that you’ve been matched up with. There is no more real or pure form of combat. But my time on the mat also helped me realize a very important takeaway from this passage of scripture. You can never be closer to someone than you are when you are wrestling them…Jacob was searching for something from God, and he wasn’t going to let go until he got it.

So often in our lives, we take God on. Something stressful in our lives hits, and we drag God out and put him in our best figure four leg lock, or rear naked choke hold that we can muster. We wrestle and wriggle with every ounce of strength that is our sinew, hoping that God will give us what we want. We echo Jacob’s call of “I will not let you go unless you bless me,” only to find that we leave the match never to be the same as we were when we began to struggle.

Jacob received a new name, a new outlook, and a limp to serve as a permanent reminder of his struggle with God. Israel or “Struggles with God” took the place of Jacob. He was not the same man that entered the fight. From that day forth, he walked with a limp. He’d received the blessing that he was after, but God had wrenched his hip with just a touch of his finger, indicating God’s absolute control throughout the entire match. No matter how far ahead Jacob thought he was, it was only through God’s grace and mercy that he was spared at all.

This is so indicative of our outlook when we struggle with God. We think we have him just where we want him, not letting go until he blesses us. Out of his great love, he shows us our blessing, but we never leave the match the same. Many of us carry around battle scars, sore muscles, and limps as a result of our struggles, nevertheless wearing them as a proud badge of honor knowing we have seen God face to face, entered into the struggle, and come out differently than we went in.

How great and awesome is a God who will allow his children to wrestle, struggle, and beg for blessings all in an attempt to draw closer to him. May we continue to seek his blessings, never letting go during the struggles that life hands us. May we also, like Israel, never be the same when we walk away, wearing our scars and bruises as badges of honor.

More information on Chris Cook, a premier southern artist from Georgia, can be found at http://www.chriscookartist.com/